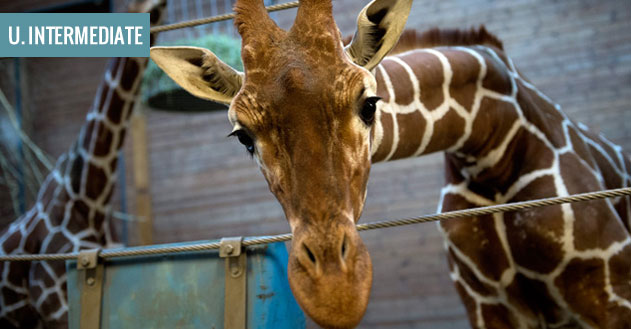 Marius the giraffe is not the only animal zoos have killed recently Reviewed by R2S Staff on Feb 2. Rating: 4

Why did Copenhagen zoo decide to kill Marius the giraffe?
Read this article from TIME.
It will be the topic of the next FREE GROUP LESSON for UPPER INTERMEDIATE level.
Subscribe to the class right now!

The killing of Marius the giraffe at a zoo in Copenhagen surprised many people around the world — and shocked quite a few — but it was no isolated incident. Also put down by European zoos in the name of genetic diversity in recent years: Zebra, antelopes, bison, pygmy hippos, and tiny Red River hog piglets.

Although zoo officials may not publicize the fact, culling is often a normal part of a zoo’s breeding program and conservation efforts. But as those breeding programs become more successful — especially with popular animals like giraffes — euthanasia is also becoming more controversial.
“As a conservation organization, we realize that there’s a crisis in the natural world, and that we have an obligation to protect species in the wild from human actions,” says David Williams-Mitchell, communications and membership manager for the European Association of Zoos and Aquaria (EAZA).

to put down (v) to kill an animal using a drug because it is very old, ill, or dangerous
bison (n) a large wild animal like a cow with long hair and a big head
piglet (n) a young pig
to cull (v) to kill animals deliberately, especially in order to stop the population from becoming
too large
to breed (v) to produce new plants or animals from existing ones, especially in order to produce
plants or animals with particular characteristics
euthanasia (n) the practice of killing a very old or very ill person without causing them pain