It’s the strongest stom on earth this year. Casualties, evacuation, guts: read how this article from CNN describes the power of a cyclone.

With 25 million people in its path, Super Typhoon Haiyan — one of the strongest storms recorded on the planet — smashed into the Philippines on Friday morning.

As the storm plowed across the cluster of islands in the heart of the country, casualties were reported, more than 100,000 people took shelter in evacuation centers and hundreds of flights were canceled.

The storm brought tremendously powerful winds roaring ashore as it made landfall in the province of Eastern Visayas, disrupting communications with a major city in its path.

With sustained winds of 315 kph (195 mph) and gusts as strong as 380 kph (235 mph), Haiyan was probably the strongest tropical cyclone to hit land anywhere in the world in recorded history. It will take further analysis after the storm passes to establish whether it is a record.

As the monster storm spun toward the Philippines on Thursday, President Benigno S. Aquino III warned the nation that it faced a “calamity.”

to smash into (v) to hit something very hard while moving fast, causing injury or damage
to plow (or to plough) (v) to move or progress with driving force
cluster (n) a small group of people or things that are very close to each other
casualty (n) someone or something that is damaged or suffers as a result of something else
to take shelter (v) to shelter, to repair
roaring (adj) making or causing a roar, as thunder
landfall (n) the time when a storm or hurricane arrives on land
sustained (adj) continuing at the same level or rate for a long time
gust (n) a sudden strong wind
cyclone (n) a severe storm in which the wind spins in a circle
to spin (v) to turn round quickly 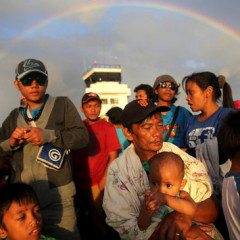 A week after typhoon: help and hope in the Philippines