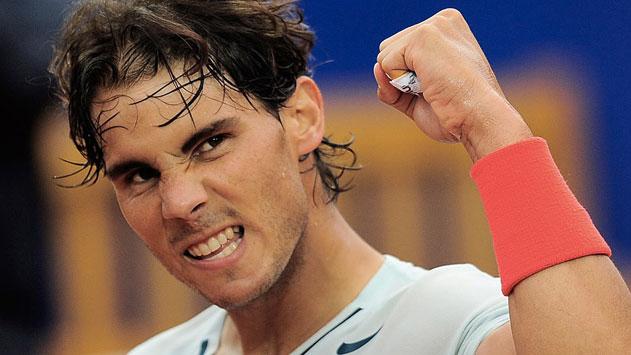 Rafael ”Rafa” Nadal is a Spanish professional tennis player and the current world No. 1.
Here is an article from the Boston Herald about his career. What does “to give up” it mean? And what is a “hard court”?
Improve your English and try to talk about this topic!

Rafael Nadal says his belief that too many tournaments are played on hard courts hasn’t changed with his success on the surface this year — he’s simply given up trying to change the system.

The Spaniard, who retook the No. 1 ranking from Novak Djokovic this week, has compiled a 27-1 record on hard courts this year, including capturing his second U.S. Open crown and three Masters titles.

His dominance on the surface has been the most surprising part of his comeback from a seven-month layoff due to a left knee injury, which many believed would limit his action on hard courts.

Nadal said Tuesday before the Shanghai Masters tournament he still believes too many tournaments are played on the surface, but he’s done trying to influence ATP policymakers.

“I am really out of politics, and I don’t want to be involved in politics of the tennis anymore. I know even if you have strong ideas and even if you believe the changes are possible, I know there is always a wall there that is impossible to go over,” he said.

to give up (v) to desist from; stop
to compile (v) to gather together
layoff (n) a period of temporary inactivity or rest
involved (adj) connected by participation or association
to go over (v) to move towards someone/something