USA Today: the flooding in Colorado was "unprecedented" 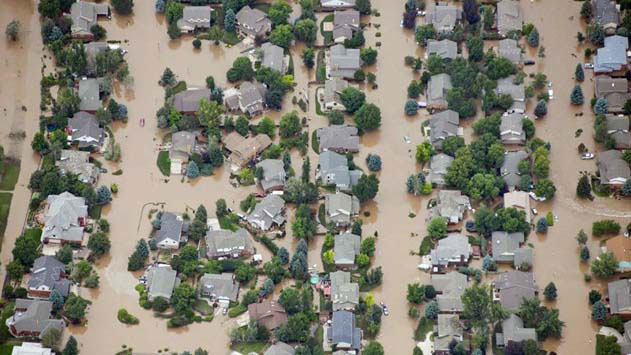 USA Today: the flooding in Colorado was “unprecedented” Reviewed by R2S Staff on Sep 4. Rating: 1.5

the flooding was “probably unmatched in at least 35 years”

The flood that ravaged Colorado earlier this month was unprecedented according to a preliminary assessment issued by government and university scientists Wednesday.

The report, which also stated that the flooding was “probably unmatched in at least 35 years,” was prepared by the Cooperative Institute for Research in Environmental Sciences (CIRES) in Boulder, Colo. The institute includes scientists from the National Oceanic and Atmospheric Administration, the University of Colorado and Colorado State University.

“In the context of the entire Front Range this was a rare precipitation event, especially for September, and in some respects unprecedented,” the assessment states.

Across the state, the floods killed at least eight people and damaged or destroyed as many as 2,000 homes. It also washed out hundreds of miles of roads and left many small mountain towns completely cut off. The floods caused damage across nearly 2,000 square miles.

The event “was likely a 100-year flood (or more accurately: a 1% probability per year flood),” the report states, and that all-time record or near-record precipitation was recorded during the week of Sept. 9-15 across the Front Range. The Front Range is a mountain range of the Rockies that runs north-south from southern Wyoming to central Colorado and includes Denver, Boulder, Fort Collins and other cities.